The Chimera, The Lion Goat Snake 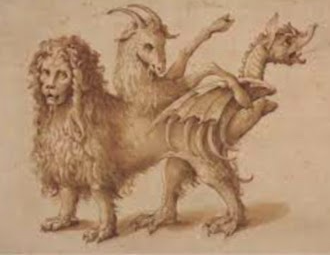 Tales of horrifying beasts are in season! For this halloween tale we’ll travel back to the ancient world of greek mythology to see an amazing spectacle that would get people saying, “Run! Run! It’s the beast from 3000 BCE!” One of the most powerful and fearsome creatures from Greek mythology! The Chimera, a- wait, what? A Lion body with a fire breathing Goat head in the middle and a Snake for the tail? That’s quite odd, how could a creature like this be considered one of the most powerful mythical creatures?

The Chimera’s not so humble tale begins with her presumably mother and father, Echidna, half woman half snake, and Typhon, the father of all monsters. She was also the sister of Cerberus (a more well known mythical creature) and the Lernean Hydra (also known as the hydra), two other monsters from Greek mythology. This fearsome beast started to gain attention when they started killing many cattle, which had supposedly devastated the country. Soon after this the king of Lycia (Apollodorus) sent Bellerophon to kill the monster in hopes the monster would kill him. The brave warrior rode out on his pegasus and shot the Chimera from above and killed the creature, though other sources say he forced her to choke on his lead sword, thus ending the beast’s tale.

The Chimera is still considered today as one of if not the most powerful mythical beasts out there. The debate on what the most powerful mythical beast was, is still debated to this day and could very possibly make the Chimera look like child’s play. But still, this beast is very powerful, due to it being almost invincible, having ties to other powerful Greek mythological creatures, and even creating a term (the term is chimera, which means a being of two or more genes from different animals)! So next time someone reading this sees a Lion-Goat-Snake-creature, maybe they should start running.