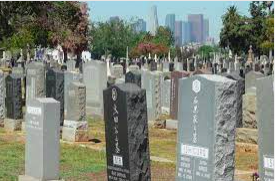 When we think of a cemetery we think of dark, haunting, ghosts, and dead people, waiting to pop out of their graves. The Evergreen Cemetery is the oldest cemetery in all of LA. This cemetery was built on August 12, 1877, and yet this graveyard still buries people to this day. The Evergreen cemetery is also considered one of the biggest memorial parks in LA, being sixty-seven acres big. There have been about 300,000 people buried here, including people who died in World War ll. Also, they have a specific area for veterans, for veterans day.

The Evergreen Cemetery is one of the graveyards that celebrates Memorial Day which is a holiday memorializing those who died fighting for our county.  US flags are placed all around the graveyard, symbolizing honor of all the veterans buried there, and elsewhere.