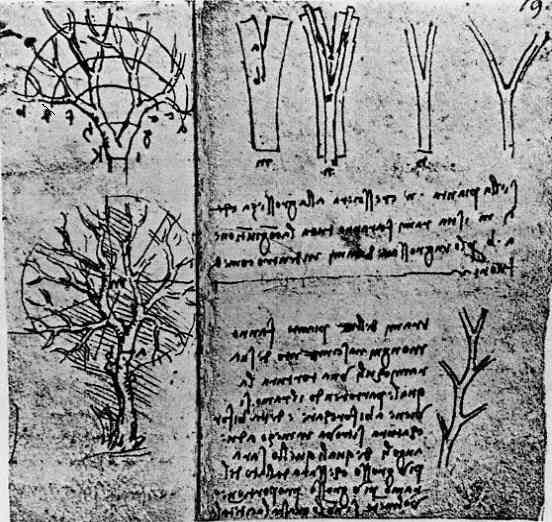 Leonardo da Vinci’s Notebooks, written between 1478 and 1518, give an inside into the mind of one of the greatest geniuses humankind has ever produced. Leonardo’s Notebooks is a collection of loose papers currently held by the British Library. 570 pages have been digitized and can be accessed online at the British Library’s website. The content of the Notebooks clearly shows Leonardo’s wide range of interests and his keen observations in multiple areas of science. An interesting fact about the Notebooks is that Leonardo da Vinci wrote it backwards from right to left so that it can be read by holding its pages in front of a mirror.

One of the pages of the Notebooks contains what is known as Leonardo da Vinci’s Rule of the Trees, which states that, as trees grow, the thickness of all of its branches at a certain height is equal to the thickness of its trunk (or mother branch.) The two original citations that reference Leonardo’s Rule of the Trees, translated by Jean Paul Richter in 1888, are below.

“All the branches of a tree at every stage of its height when put together are equal in thickness to the trunk [below them].”

“Every year when the boughs of a plant [or tree] have made an end of maturing their growth, they will have made, when put together, a thickness equal to that of the main stem; and at every stage of its ramification you will find the thickness of the said main stem; as: i k, g h, e f, c d, a b, will always be equal to each other; unless the tree is pollard—if so the rule does not hold good.”

Fast forward over 500 years (2011) and French scientist Christophe Eloy, using computer-generated models, concluded that trees do, in general, follow Leonardo’s formula and this, in turn, help trees withstand strong winds. Christophe Eloy’s paper was published in Physical Review Letters, a peer-reviewed scientific journal published by the American Physical Society. You can listen to NPR’s fascinating story on Eloy’s research below.

Image by DarkWorkX from Pixabay